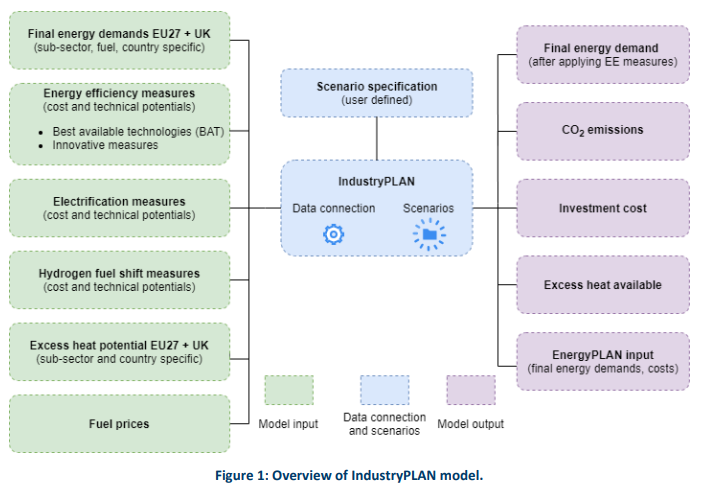 IndustryPLAN is a tool for analysing industrial energy demands of European countries. The tool was developed by researchers at Aalborg University and Utrecht University as a Microsoft Excel spreadsheet using a combination of Excel functions and VBA coding, making the tool accessible to a wide audience. It targets the lacking middle ground between highly site-specific analyses of individual production facilities and generalized nationally aggregated analyses. The purpose of the IndustryPLAN tool is to open the black box of industry and provide a framework for developing subsector specific analyses on both a country-specific and European level. This is done by establishing both disaggregated industry energy demands for all countries of the EU and an extensive catalogue of potential mitigation measures for the future.

Applying the energy efficiency first principle, the IndustryPLAN tool provides a framework for investigating the industrial energy sector in the context of the renewable energy transition. The user is provided with a flexible platform for developing future industry energy scenarios based on a range of potential energy efficiency measure, electrification measures, and hydrogen fuel shift measures.

The “Industry mitigation scenarios and IndustryPLAN tool results” report presents the scenarios resulting from the detailed analysis of the European industrial sector in the sEEnergies project. The scenario results provide the inputs necessary for representing the industry sector in further holistic energy system modelling in tools such as EnergyPLAN.

The scenarios included and presented in the named report are based on two connected reports from the sEEnergies project, namely “sEEnergies D3.1 Assessment of reference scenarios for industry ” and “sEEnergies D3.6 Energy efficiency potentials on top of the frozen efficiency scenario” which provide further documentation on the reference scenario energy demand and the included mitigation measures, respectively. Furthermore, this report is an extension of the previous report “sEEnergies D3.2 Beta version of the model IndustryPLAN”, where a beta-version of the IndustryPLAN tool and expected scenarios were presented.

The IndustryPLAN tool and the results presented in these reports are relevant to energy system modellers, energy planning practitioners, and policymakers, as it contributes to the quantification of feasible transition pathways for the industrial sector.